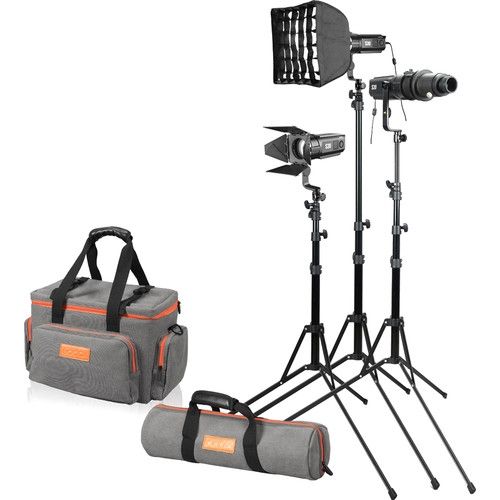 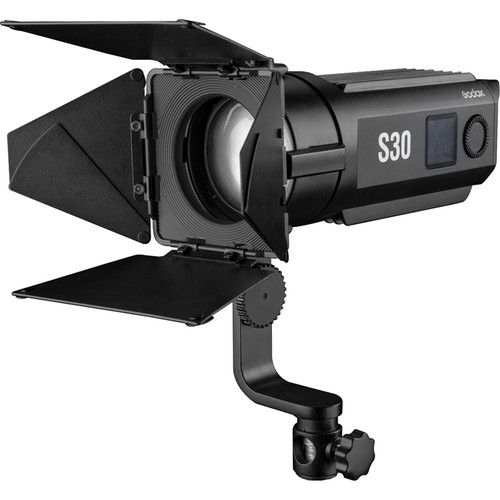 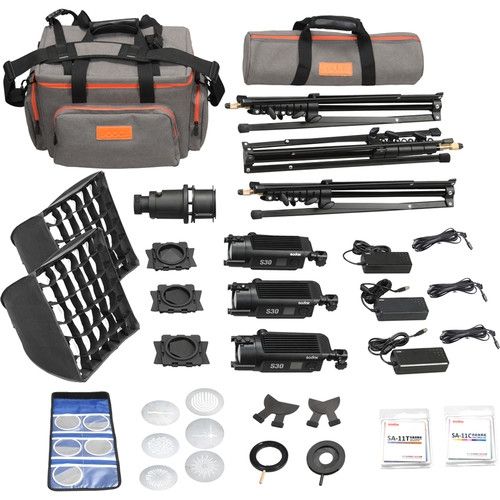 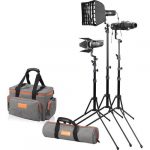 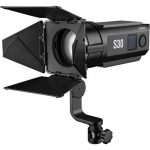 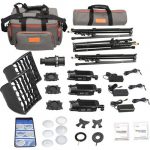 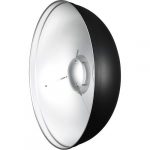 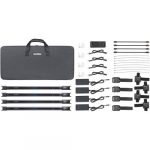 Godox LED focus light S30 3 head kit. The kit includes three S30 LED lights each with barndoors, a power adapter, and a light stand. For precise, almost “surgical” lighting, the kit includes the optical Projection Attachment with an 85mm lens. Godox also provides a full complement of accessories for it including an iris, set of framing shutters, gobo set with holder, and a scrim set. Two softboxes are also included, as are a Color Effects Gel Set and a Color Temperature Adjustment Gel Set. Two bags are provided, one for the light stands and another for the S30s and accessories.

Godox S30 LED Focusing LED Light
The S30 LED Focusing LED Light from Godox is a lightweight, versatile source with light intensity, beam spread, and power options. The S30 has an adjustable beam angle of 6 to 55 degrees for long throw work or to flood out a silk. The output can be further controlled by swinging one or more leaves of the 8-way barndoors into the beam path to facilitate selective lighting. The S30 is also dimmable from 10 to 100% to save you the trouble of jockeying it back and forth for the desired light intensity. Ideal for shooting outdoors or seamlessly integrating with daylight-balanced fixtures, the S30 has a solid 5600K color temperature with a high CRI/TLCI rating of 96 that indicates impressive accuracy in the rendering of color. The S30 is ready for worldwide use using the included AC adapter, but it will also run on the provided Li-ion battery (with charger) when mains power is unavailable, or an optional power bank using a USB cable.

Consistent Beam Spread
Godox uses aspheric optics for output that’s even from edge to edge.
Beam Angle Control
Coverage is adjustable from 6 to 55 degrees.
Variable Light Intensity
The S30 is dimmable from 10 to 100%.
Power Options
The S30 runs on the included AC adapter, NP-F-type batteries, or a power bank with USB cable.
Numerous Accessories

Godox Projection Attachment with 85mm Lens for S30 Focusing LED Light
Ideal for precise and selective lighting of a subject, the Projection Attachment with 85mm Lens for S30 Focusing LED Light from Godox is an optical modifier that allows the S30 to project a de-focused soft circle or a focused hard circle of light. Among the many optional accessories for the Protection Attachment are a 60mm wide-angle lens for covering a large area while close up, and a 150mm telephoto lens for projection from a distance. Four optional shutter blades allow you to block off areas of light to create projected slits, squares or triangles, while separately-purchased steel gobos with patterns such as fire etched into them can be projected on scenery. There’s also a set of scrims for lessening the light output and an iris for varying the size of the circle of projected light.

Godox 213B Light Stand for S30 LED Light
The 213B Light Stand for the S30 focusing LED light from Godox rises to a maximum height of 7′ and folds down to 1.7′. This four-section stand has a reverse-folding leg design and features sturdy but lightweight aluminum construction.